There are some places on Earth that are eternally magical.

North Pembrokeshire in Wales, UK is one of those for me!  I’ve been visiting a very specific area on the North Pembrokeshire coast and inland to the Presceli Hills for about 13 years now and I’ve had some very happy times and inspirations there.

As some of you will know, you do not visit Wales for the weather!  However, the changing moods of landscape highlighted by the ebb and flow of rain and sunshine, wind and even snow are always an interesting part of the interaction with the Earth energies – the vastness of the sky and rolling landscape. 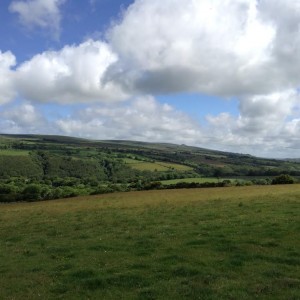 The magic appears as you realise that this landscape is timeless, so much bigger than we are.  The rocks, the hills have been there for millennia.  In fact some parts of Pembrokeshire rock is actually over 1000 million years old!  The area around St Davids peninsula is part of pre-cambrian rock which is part of Pangaea – the Earth mass that was the original landmass rising up out of the oceans before breaking up and drifting, forming the continents of the world we know today.  This amazes me!  Just imagine the ancient memory and history held in the quartz, granite and feldspar of these places and also within Presceli Bluestone itself.

Preseli bluestone is a feldspar/augite rock that contains calcium, magnesium, iron oxide and aluminium.  It is heavier than granite.  Stonehenge is made from presceli bluestone and there is still much speculation as to how 5,000 years ago the ancient people of these lands dragged huge megaliths across the land to Wiltshire and erected the stones to create stonehenge.  (which was never actually completed)  The ancient burial chamber pictured, Pentre Ifan, is made from Presceli Bluestone – a fascinating, peaceful, still place surrounded by the hills and looking out to the sea in the distance.

When you connect to presceli bluestone there is a feeling of the ancient land, of timeless wisdom, of changing, shapeshifting magic that is so much a part of this magical place.  It gives you the sense that what you see is not necessarily what is!  – mysteriously aware that there could be several realities occurring simultaneously in the present moment!  One very special rock formation is ancient Hill Fort called Carn Ingli and it was here that I had the inspiration to write Gaia’s Earth Medicine.  I had the distinct feeling of being at home in this particular place and of having been there before in some other time.   I strongly believe that the rocks and stones in an area give energy to a place which is stabilising and grounding.  This is why certain landscapes feel different and may evoke certain feelings and insights.  I will write more about this another time.

We have some beautiful pieces of Prescelli bluestone here on the site to evoke your own sense of magic – please take a look here in the hearts, angels and spheres section.

This website uses cookies to improve your experience while you navigate through the website. Out of these, the cookies that are categorized as necessary are stored on your browser as they are essential for the working of basic functionalities of the website. We also use third-party cookies that help us analyze and understand how you use this website. These cookies will be stored in your browser only with your consent. You also have the option to opt-out of these cookies. But opting out of some of these cookies may affect your browsing experience.
Necessary Always Enabled
Necessary cookies are absolutely essential for the website to function properly. This category only includes cookies that ensures basic functionalities and security features of the website. These cookies do not store any personal information.
Non-necessary
Any cookies that may not be particularly necessary for the website to function and is used specifically to collect user personal data via analytics, ads, other embedded contents are termed as non-necessary cookies. It is mandatory to procure user consent prior to running these cookies on your website.
SAVE & ACCEPT